Let me set the stage here, which might be helpful, especially for those of you who haven’t read parts 1 and 2. I’ve followed a Money Point, Chesapeake, VA Killdeer family since early March 2019. They built their first nest and had their first 4-egg clutch on abandoned railroad tracks there. Typical Killdeer. Those eggs were likely taken by the local coyote, whom I and others had both seen and heard.

But the Killdeer pair seemed unfazed. They marched to a new area within the nearby Elizabeth River Project Money Point restoration site, brownfield land that had been reclaimed and restored, and made a new nest in a small bed of gravel just north of the rain barrels (again—typical Killdeer). There, they initiated a second 4-egg clutch. Birds’ persistence and resilience never cease to amaze me.

Those 4 eggs hatched right around 4/15. I wasn’t there when it happened, so this is an educated guess. I began taking pictures of the new family shortly thereafter. And I took a slew of photos on 4/19, some of which I’ve already shared. (Had I used single shot mode, I might not have taken quite so many.)

As I mentioned in “The Killdeer Saga, Part Two,” under “Mysterious Occurrence,” I arrived confidently on the morning of 4/20 to watch and take more pictures of the family. It was a lovely morning, as I recall. Cooler spring temperatures, but full sun and great golden hour lighting, which I made sure were at my back as I settled down 40-50 feet away from the birds.

I remained in that spot for about an hour. I didn’t sense any problems at all. The chicks were absorbed in the act of feeding, and their parents alternated between standing guard and feeding, themselves.

What follows is my slightly modified Facebook description of what happened next, complete with my request for help in understanding it.

After I’d been watching the birds for about an hour, and for no apparent reason, the parents decided to usher their chicks out of the preserve, under the gate, across a busy road, onto an active railroad bed, and then to a small sliver of marsh just beyond. The chicks, being introduced for the first time to the big world beyond their birthplace, had a hard time negotiating the rocks around the tracks (they occasionally stumbled and fell), and for a while couldn’t see and respond to their parents’ calls, as the tracks were too tall, and their parents were on the other side. They appeared confused and not a little bewildered. Here’s a photo that might help to illustrate. Any idea why the parents would do this?

A Request for Help

Many on Facebook responded to my request for help, and all responded well to what I like to call my “Hansel and Gretel” photo above. Several suggested that it might be best to do my observing and picture-taking from a car, and a few advised me to always wear a hat, which I usually do anyway. Someone later commented that those were great ideas as predators don’t roll, and they don’t wear hats, either. I received many good-natured comments and much helpful advice.

One person, though, responded very differently. She took me to task for “acting like a predator” and for my lack of understanding/obtuseness. She went on to say that even her kids would understand that I had provoked the Killdeer family’s departure. I and several others took issue both with her charge and with the tone of her response.

Well, I went back to the area on 4/26. The family had returned to the breeding site. I carefully moved in, and at a “safe distance” sat down and began taking pictures. In a matter of only 4 or 5 minutes, the above scene played out all over again. The parents ushered their chicks away from the breeding site, back to the railroad tracks, and back to the marshy area beyond. And I left the site now knowing the cause of their behavior and the role that my misguided fieldcraft had played. It also dawned on me that my presence (or intrusion) might have been the reason for some of those brooding episodes I’d seen (see “Parental Care”). Owning up to my responsibility and acknowledging the predator charge were pretty tough pills to swallow.

Here, by the way, is one of that morning’s captures. The arrow is pointing to a rapidly growing and developing wing.

For comparison, below is one of the chicks back on 4/20, 6 days earlier. Notice its rounder look, its shorter tail (with pin feathers at the base), and its tiny, unfolded wing. My guess is that its still-developing muscles can’t quite fold that wing up.

Afterward, I reflected a lot on what had happened and how I’d need to change my field tactics. I wrote the following on 5/4 after I’d visited the family once again: “Twice, I got a little too close to this family while photographing them, and twice, the parents lead their youngsters away. I learned my lesson. Today I returned, but this time I kept my distance. The parents barely took notice.” Here’s a photo I took that day (and from that greater and more comfortable distance).

Body proportions and body shape had changed, most of the down feathers had been replaced, the wings and tail were now noticeably larger—and would soon become the main instruments of flight—and there was now an extra chest band. Something else had changed, as well.

I discovered that 2 of the chicks were missing. More trials and tribulations for the breeding pair. Even though adult Killdeer are masters of distraction displays (broken leg, false brooding, ungulate display, etc.), they still lose chicks to predation, the likely problem here.

I visited the area again on 5/15. I found the now-smaller brood and their parents back in the breeding site. I went back again on 5/18. This time they were spending their time both near the tracks and on the industrial plant property nearby. Again—typical Killdeer.

A couple of things were clear from those 2 visits: The chicks were growing fast, they were spending more time out of their parents’ line of sight, and they still couldn’t fly. This little collage I put together will give you some idea as to how fast they’d grown and how much they’d changed in about a month’s time.

I followed up with a visit on 5/19. I think that the family had finally vacated the breeding site. One of the parents was still guarding from a distance, but it seemed as if the family group had dispersed even further.

As I carefully approached the area near the industrial plant where the 2 chicks were feeding, they at first eyed me cautiously, but then they sprung up and flew, giving those loud, plaintive calls for which the species is named. I’d only heard “peeps” from them before. No doubt they had fledged between my visits, and a new life phase had begun. Here is a photo from that day. The plant gate, which they could now vault, is in the background.

And here is the last photo I took of the young, followed by one of the first. Two similar, characteristic, foraging poses.

I headed for home. As I drove, I remembered a message that fellow-birder, Laura Mae, had sent me about how exciting it is to witness “lovely life cycles of courting, nest building, territory defenses, and warp speed egg-to-fledge metamorphism.” A terrific line. I never witnessed the Killdeer pair courting, but I did observe pretty much everything else. What a treat and a thrill.

When I arrived home, I downed a large glass of ice water and then went to turn the radio on. Ironically—and fittingly—the first piece of music that I heard was Ralph Vaughan Williams’ “The Lark Ascending.”

This concludes what has now become a Killdeer saga “trilogy.” I hope you enjoyed it. Thank you, as always, for reading. And Elizabeth, thank you for reading my “Killdeer Saga” posts, and some of my other posts, to your boys. I honestly can’t think of a higher form of praise.

What follows are the thoughtful and perceptive words that Karen Gieron of MD sent me after I’d sent out my “admission” on Facebook and elsewhere. They are followed by a final Killdeer photo.

“David, first, thanks for being sensitive enough to connect the dots and realize what the [Killdeer] parents were telling you. And second, thank you for sharing your ‘a-ha’ moment with us. It’s especially important during the breeding season to give even more space to nature’s families. And while we all crave to know more about the animals we share this Earth with, we aren’t being good stewards if we can’t see when our behaviors start to cross that line. Thanks again!” 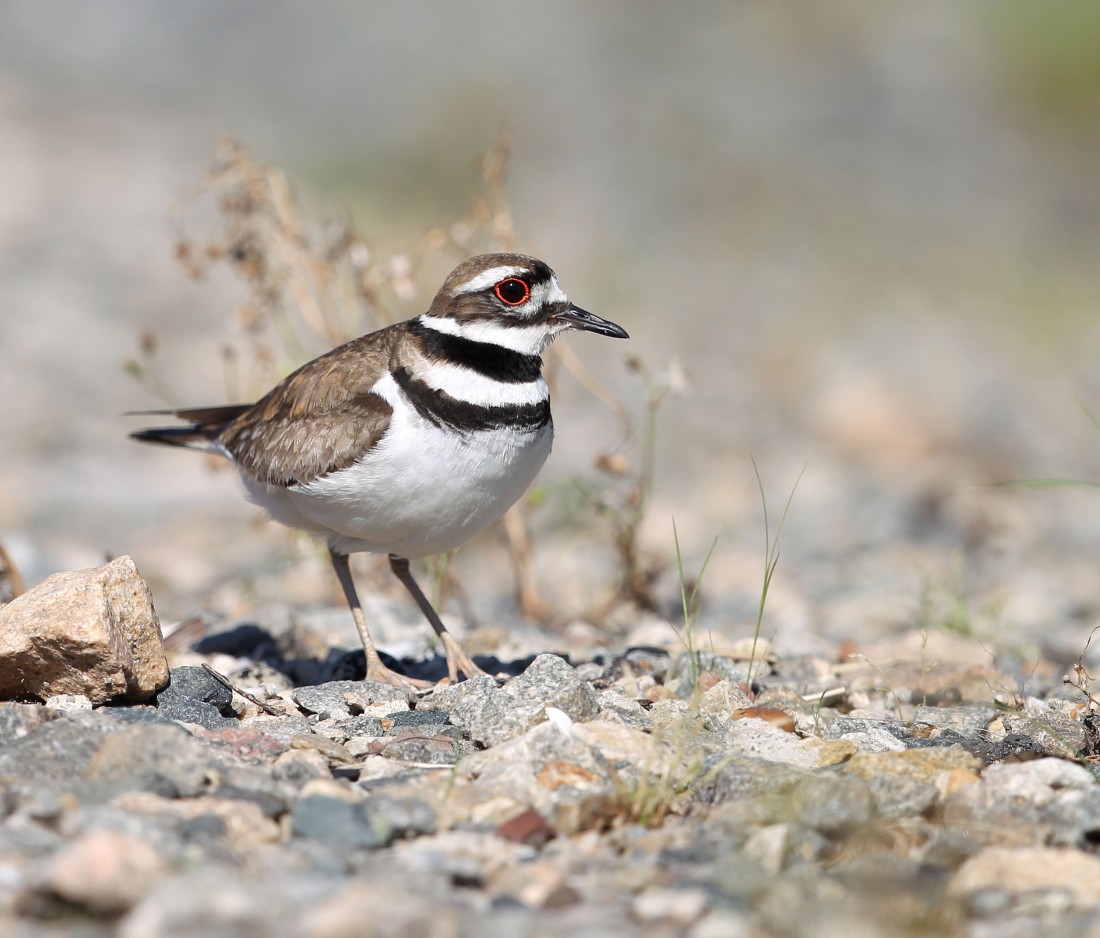 9 thoughts on “The Killdeer Saga, Part 3”

Dave Gibson formerly taught at various places in MA including Fisher College, MassBay Community College, and the Harvard Museums of Cultural and Natural History. He was the self-appointed Ornithologist-in-Residence of South Norfolk, VA before he moved to PA. While in VA, he also worked with the Elizabeth River Project, the blog sponsor, as a bird trip leader, teacher, educational consultant, and photographer. He provided those services to other organizations, as well. Dave has written and spoken publicly about birds and bird conservation. For example, he’s the proud author of the birding Chesapeake, VA profile as well as a piece written for the Chesapeake Conservation Landscaping Council: “Every Bit of Wild.” He’s also taken too many bird photos to count, some of which have won awards and been published. You can see his eBird photos and recordings here. Dave is an active eBird contributor.