The day is on the wing.

Above is my favorite line in a children’s poem about spring by N.M Bodecker entitled “Goodbye My Winter Suit.” That line is followed by another great line: “The kite is on the string.”
Let me share the third verse of the poem with you:

I thought about that verse when taking this shot of newly fledged Canada Geese and their parents. This is yet another early morning Inland Rd., Chesapeake, VA photo. 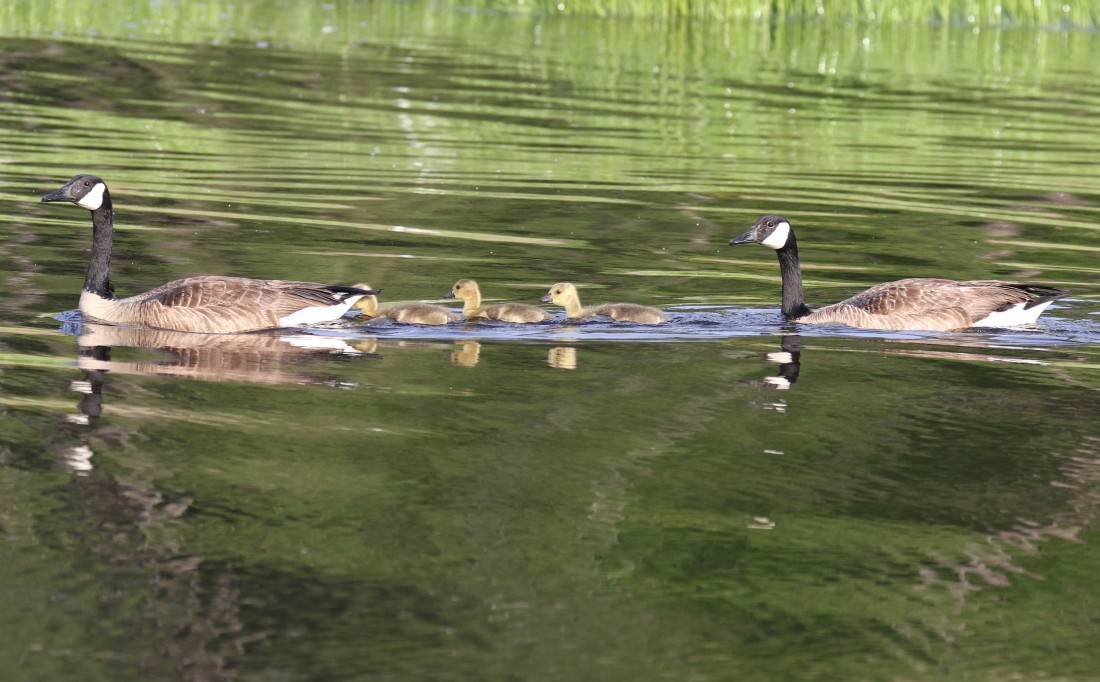 Speaking of Canada Geese…while sitting on railroad tracks close by, I took a bunch of pictures the other day of bathing, preening, splashing, chasing, and generally noisy—you guessed it—Canada Geese. (Word to the wise: don’t sit on railroad tracks until you’ve cleaned them off first.) These pics were taken at Money Point in Chesapeake, VA just outside the Elizabeth River Project restoration site there. Shooting at eye-level was important here. Here’s what I’m calling the “Conductor Series” from that photo shoot. And boy was this conductor working hard. You can even see the perspiration! So what was this goose conducting? Any thoughts? Here’s my thinking: Beethoven. Click on any pic to see a slide show. 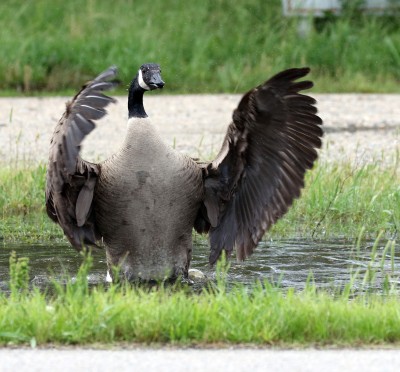 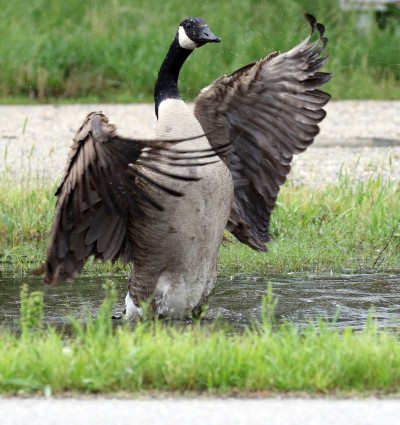 I’m going to go off on a tangent, but on an important one. Did you know that the river in that area used to be a “dead zone”? But thanks to what ERP has accomplished there in cooperation with its many partners, that part of the river is very much a “live zone” now. And the marsh, upland area, meadows, and even the area just beyond where I found these geese is a live zone as well.

As proof, we’ve tallied 102 species of birds in the area. That’s a little less than 1/4 of all the species that have occurred in the state of VA. Restoration site indeed! Feeding Common Loons just offshore are now a common sight there during spring migration. We usually associate this species with pristine NH lakes and not with rivers flowing past a heavily industrialized area on one side and a naval support facility on the other. I could go on. Savannah Sparrows, uncommon elsewhere in the watershed and a grassland species of some concern, spend the winter months there. The first spring-arriving Blue Grosbeak to show up anywhere in the watershed was spotted there, and a Solitary Sandpiper, an uncommon spring transient, just made an appearance there. None were seen elsewhere in the watershed this spring.

The above references to spring make me think now of the entire fourth verse of the Bodecker poem. Here goes:

The day is on the wing,
The kite is on the string,
The sun is where the sun should be,
It’s spring all right! It’s spring.

The references to spring also make me think of this, a story about a remarkable, no mind-blowing—and probably life-changing—spring outing up in Quebec.

Just imagine for a moment being on the bank of the St. Lawrence River and gazing in almost disbelief at a fast-moving, sky-filling “river” of migrating warblers. Birding is a little like going to a baseball game: you never know what to expect. This group of bird watchers just witnessed a truly historic one.