Before we answer that question, here’s a fun sequence of  ‘arrival through departure’ shots I took at the end of Inland Rd. and right on the river. This is an Eastern Kingbird looking for nesting material. Birds are now settling in to their nest-building, egg-laying, and brood-raising responsibilities. Perhaps a child had wrapped string around these cleats? The kingbird discovered the string and decided to use it as nesting material. It was a struggle at first, but the bird succeeded at removing some string, which it eventually carried off. 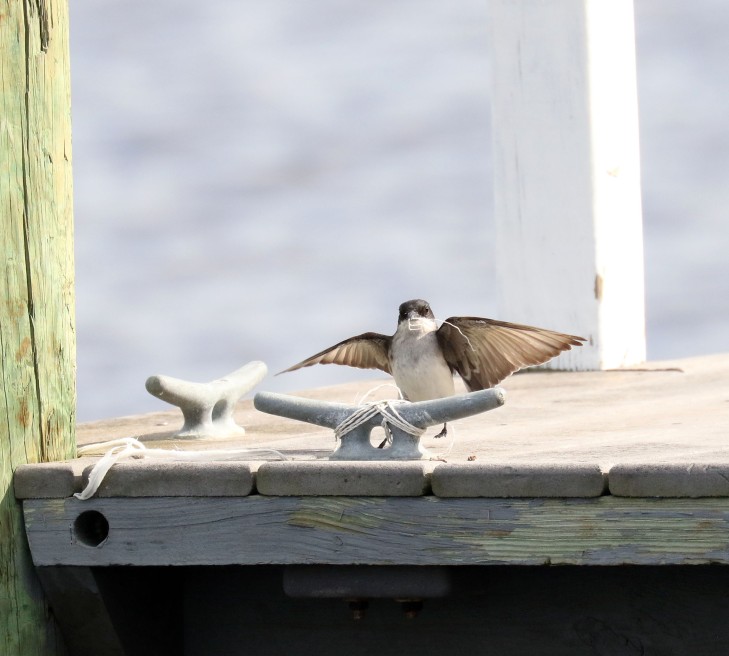 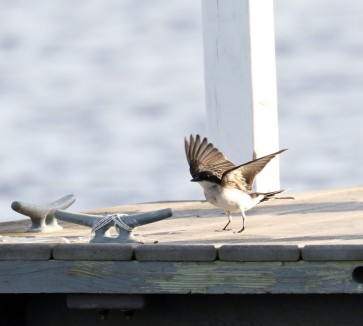 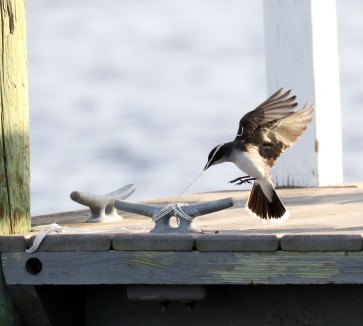 I heard a Familiar Song

Now the answer to our question. We were walking around Paradise Creek Nature Park in Portsmouth. I was being interviewed by David Macaulay, a correspondent with the the Virginan Pilot. He wanted to learn more about the birds one can find at the park, and why I was interested in birds in the first place. What was it about birds that powered my interest in them? We were having a great time, a pleasant discussion, though we did have to dodge a few raindrops, and eventually had to duck into the woods to avoid a steady downpour.

As I’d just finished telling him about the female Painted Bunting that showed up there in January of 2016–a tropical bird well outside of its range–I heard a very familiar song. I’m from Boston and the song would be very familiar to any so-attuned Bostonian. The song was loud! I stopped dead in my tracks. I couldn’t believe what I was hearing. Dave didn’t quite know what to make of the situation. I apologized for the interruption. Yet another bird well outside of its range, yet here at Paradise Creek. And yet another ‘birding is like baseball’ moment.

I collected myself and tried to recall the name of the species. Sometimes it’s not easy recalling the names of birds you haven’t heard in a while. And boy was I unprepared. I’d been in Chesapeake, VA since ’09. And I wasn’t birding, I was interviewing! I finally figured out that what we were hearing was a singing Warbling Vireo, a species that winters south of here, migrates west of here, breeds north of here, and seldom, if ever, visits here. But it honestly didn’t surprise me that it showed up here–at this ‘destination for birds’. I’d explained to David that this place is a ‘migrant trap’. Well we’d just heard Exhibit A. You can hear my humble smartphone recording here. Scroll down until you find ‘Warbling Vireo’. Here’s a great photo of this species. 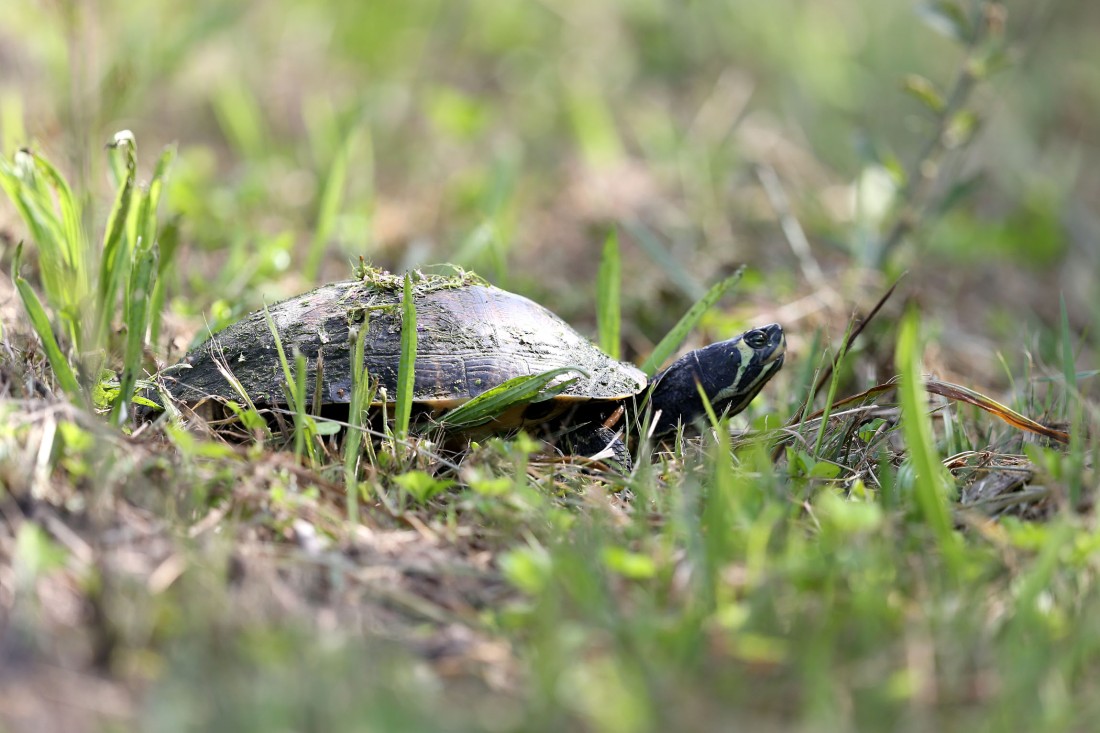 Now I’ll leave you with this photo. I took it as I was on my way to photograph a couple of Osprey nests near the end of Bainbridge Point in Chesapeake. Oddly enough the 2 nests are only about 1/10 of a mile apart. One is on a channel marker and the other is on a cell tower. A thoughtful fellow employed by a utilties outfit had pulled over by the side of the road and was redirecting traffic away from a large turtle that was ambling across same. I scrambled out of my truck, quickly introduced myself, got down low, and fired away. This is a ‘run and gun’ shot more focused on the shell (and perhaps a few blades of grass) than the eye, but you get the idea. Yet another example of some of the interesting critters in the Elizabeth River watershed. I wonder if you can identify it.