I thought, but only momentarily, about calling the new blog “Birds Soar; Skins Sore,” an article headline in the 11/5 Virginian-Pilot. The article didn’t appear in the “Wildlife and Nature” section. And it wasn’t authored by Mary Reid Barrow. “Birds Soar; Skins Sore” was about the Atlanta Falcons defeating the Washington Redskins. A particularly sorry football game.

We are discussing birds soaring, bird flight, and will continue to do so here. But “skins sore”? “What does that have to do with anything?” I thought. Nothing. So I gave up on the idea. I settled instead on the title, “Flying Machines.” Glenn Butler referenced man-made flying machines in his comment–alas, one of the few comments I’ve received–at the end of the last blog. I responded. And we both concurred that birds’ flight skills exceed those of any machine we humans have come up with. Birds are superior flying machines.

Pictured here is either an American Crow or a Fish Crow. You decide. They’re nearly identical, and both are permanent residents here. 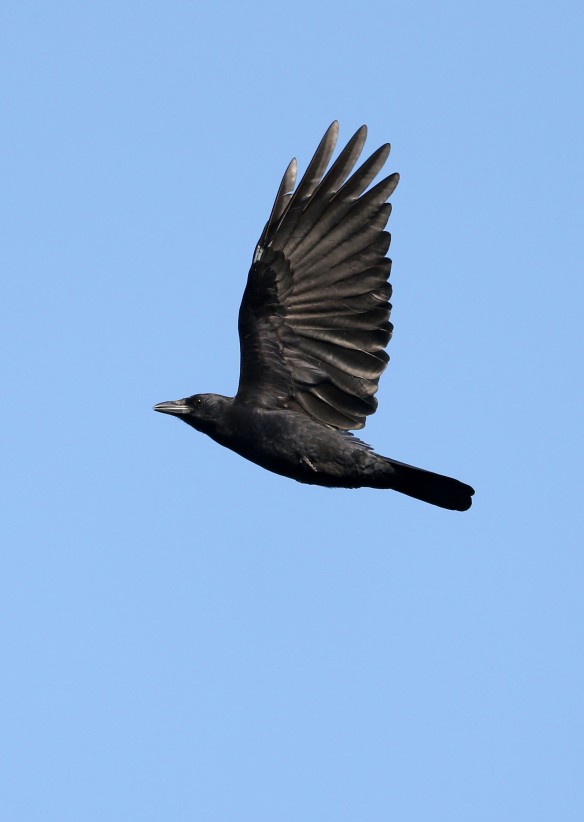 Fish Crows are more coastal, thus the common name, and their calls (or “caws”) are more nasal. Money Point in Chesapeake, VA, one of the Elizabeth River Project’s restoration sites, is always a good place to find them. The other day I observed one harassing an American Kestrel, our smallest falcon and bird of prey. Money Point is a great place to find that species as well. Kestrels need open areas and good places to perch (trees, utility poles, light poles, etc.) for hunting their prey: smaller birds, insects, small mammals, reptiles. That location has all of the above in abundance.

I don’t usually crop flight photos the way I cropped the crow photo. Flight shots, especially, need “breathing room.” It’s always best to capture a bird flying into a space. Here it appears as if the crow were just suspended in space, like part of a mobile. Action photos need a dynamic feel. This photo, though good, lacks that. But it does show us some things about bird flight. We’ll examine those in a future blog. But as promised, we’ll continue to discuss bird flight. And as promised, we’ll take a look at that Great Egret flight sequence.

Here again is the shot I posted in the last blog. (Please remember that you can click on and enlarge any blog photo except the feature photo.) The egret had just taken off from a bare limb at Money Point.

You’ll notice in the first photo that the Great Egret is coming out of a crouch and is pushing off, then taking off. And the wing down-stroke has begun. This is the way many larger birds go airborne, but many smaller birds do the same. They jump off branches, cliffs, nesting platforms, buildings or other high places. Notice in the second and third photos the completion of the down-stroke. The down-stroke is the real power stroke. Birds rely on it. Then notice the up-stoke in the last frame. The down-stroke and the up-stoke propel the bird forward and keep the bird aloft, as we see here. The wing strokes together provide both thrust (forward movement) and lift (the force that keeps a bird aloft). We’ll explore all of this further in the next blog.

These tires were dumped well outside the Elizabeth River watershed in a Great Dismal Swamp NWR ditch in Suffolk, VA. My wife and I spent an entire day removing them. There were many more tires than the ones pictured here. We carted off 3 eight-foot bed truckloads.

I post this photo because this can happen anywhere, inside or outside the watershed. Managers of properties like the above encounter scenes like this all the time. Signs might be posted, and roads might be patrolled, but that often doesn’t matter. Why rivers, lakes and swamps are considered go-to dumping grounds for tires and everything else is something I don’t understand.

“The natural world draws me in. It sustains my curiosity, is always ripe for observation to better understand, often yields transcendent beauty and surprising twists, and gives perspective on the miniscule fraction of time that I am part of it.”
The words of legally blind writer Martha Steele from her article “Musings: Solitude” in the February 2017 issue of Bird Observer, a bimonthly journal about birding. You can learn more about this acclaimed journal here.

This isn’t a quip, question or quote. It’s a statement.
Thank you, U.S. military veterans, for all you have done to keep us safe. We’re truly in your debt.