This adult Bald Eagle shot, courtesy of Vic Laubach, who also provided the Broad-winged Hawk kettle shot in “To October,” is for our U.S. military veterans, as we continue to pay tribute. As I stated in the last blog, “Thank you for all you have done to keep us safe.” We’ll take a closer look at Vic’s flight shot in an upcoming blog.

Speaking of flight, and in case you hadn’t noticed, we’re developing a short series on bird flight, thus our blog title. We began the series 2 blog posts ago in “Designed to Fly,” and we’ll continue the series here. But first we have some other “business” to take care of. And we have some very good news to report.

When we’ve worked with many others to accomplish something, and we want to broadcast our success, we never say “I did it.” Or we shouldn’t. We might not even say “we did it.” Though we could. More often than not, when we’ve achieved success as a team and with the help of many supporters, we say, “you did it.” So here goes. You did it (with particular thanks to Jessica Ruthenberg at VDGIF). And it’s now official. Another trumpet fanfare, please. Paradise Creek Nature Park in Portsmouth, VA, an Elizabeth River Project restoration site, is now part of the Virginia Bird and Wildlife Trail Coastal Region trail system. Wahoo!!  And this great “urban oasis” has now become what it has been since its founding in 2012: a preeminent Hampton Roads destination for bird and wildlife viewers. Of course, we knew it was that all along. And as wildlife and bird watching is indeed loads of fun, we could say, with respect to Paradise Creek, that what was formerly Superfund is now super fun. (I’ve been itching to write that for a while now.) The park is totally a wonderful place to visit.

Now back to “flight school.” OK…I can hear the sighs. As you continue reading, please remember that you can click on photos to enlarge them. We’ve noted in the last 2 blogs that birds’ shapes, smooth surfaces, and flapping flight, the up-stokes and the down-strokes, keep them aloft and moving through the air. We haven’t covered gliding flight yet, but we may. We’ve paid special attention to the down-stroke, which is the stroke that provides most of the power for flight. We’ve also mentioned drag (air resistance), thrust (the force that propels a bird forward) and lift (the force that keeps a bird aloft).

Here are 2 female Mallard duck flight shots that we’ve seen before individually. This time they’re arranged as a composite. The down-stroke is featured in the top photo, and the up-stroke is featured in the bottom one. Note again the closed flight feathers in the top shot and the open flight feathers in the bottom shot. In the bottom shot, too, note that the ends of the wings appear to have been folded a bit. This folding also helps to reduce drag.

As we continue to consider bird flight, and the idea that birds are “designed to fly,” let’s take a closer look at the top photo. But let’s do that by revisiting the original shot–that “study in aerodynamics.” Once again, this is a female Mallard flying in a very straight line just above the Elizabeth River Southern Branch tributary near Inland Road in Chesapeake. 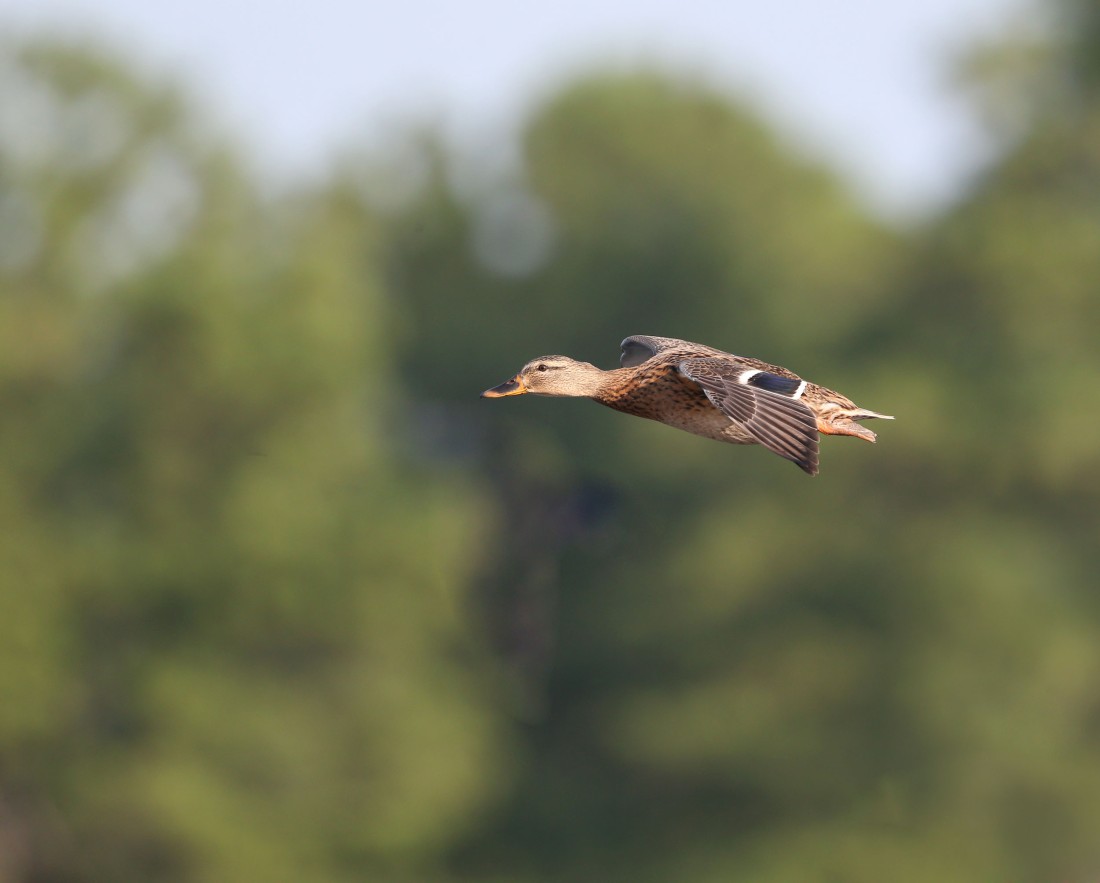 Look at the enlarged photo. We’ve already noted the smooth and rounded leading edges of the wings. Now notice, as well, the curved upper surfaces of the wings compared with the flatter lower surfaces. Observe, too, the tapered trailing edges of the wings. This shape is known as an airfoil. Think: a sail on a sailboat, a blade on a wind turbine, or a wing on an airplane. A bird’s wing, much like a bird’s body (see the contour of the duck’s body above), has this distinct shape. “So what does this have to do with flight?” you might ask. When a bird’s wing–an airfoil–moves through the air, the air pressure below exceeds the air pressure above. And the greater pressure below creates a force that provides lift. Here’s a very simple explanation of airplane flight provided by NASA. Who understands the science of flight better than them? This explanation also serves as an explanation of bird flight. But stay tuned for my next blog for a more in-depth explanation.

There’s another takeaway for me in the top photo. Please enlarge the photo again. Notice how stiff and how strong the Mallard’s wings look. Bird flight feathers and wings are amazingly strong. They have to be to enable flight (and to stand up to all the wear and tear). According to noted artist and author David Sibley, in his 6/21/18 BirdWatching magazine article “How Waterfowl Hide Their Wings“: “The avian wing is a marvel of engineering: lightweight but incredibly strong, stiff yet flexible.” He goes on to say that a bird wing is “an airfoil that is instantly adjustable to any conditions.” And if you think about it, a bird in flight has to ready for just about anything, like a sudden obstacle, a stray wind gust or a hungry raptor.

I’d like to wrap things up here by providing a final photo. This is a male Yellow-bellied Sapsucker that visited our front-yard ornamental pear tree. We expect to have a partridge there in another month or so. I took this through the storm door, so there was an extra layer of glass between the camera sensor and the subject. But all in all, the photo didn’t turn out too badly.

Help to build a better world for birds. You’ll find the video here both evocative and enlightening.

This is the second verse of Percy Bysshe Shelley’s famous poem, “To a Skylark.”

Higher still and higher
From the earth thou springest
Like a cloud of fire;
The blue deep thou wingest,
And singing still dost soar, and soaring ever singest.
Happy Thanksgiving
Click here to email Dave or leave your public comment below.