If you’ve read my last 2 blogs, you’ll know that I’ve been photographing, observing, and learning about Green Herons, and birds in general, through my regular trips to an unheralded, 11-acre park in Chesapeake, VA: Lakeside Park. I’ve referred to that park—but this is true of so many city parks—as a “bird world in miniature.” Parks like these are places where visitors, with a little planning and patience, can observe bird behavior and gain insight into the fascinating life of birds. They can learn about bird migration, bird specialization, the nesting cycle, birds’ remarkable skills, the characteristics of individual species, etc, etc.

The Green Heron is the third bird species I’ve studied. The other 2 were the Osprey and the Killdeer. If you’d like to read the results of my fieldwork, such as it is, please search under the “Osprey” and “Killdeer” categories using the categories widget in the sidebar. If you’d like to read what I’ve written so far about the Green Heron, please search under that category. I think there’s much to be said for diving deep into the study of a single bird species. Learning about a species in depth is not only rewarding and fun, but it can also open a window into learning about all—a point I’ve made, now, a number of times.

Speaking about in-depth learning, and planning and patience, let’s revisit a photo I posted in my first Green Heron blog, “An Ode to a City Park.” I had been at the park and had been “in position,” or close to where I knew the action would be, for about an hour before I spotted this.

I’m not so sure, now, that this juvenile was practicing prey-capture or testing the feather for edibility. The bird may actually have been thinking of using the feather as a lure to catch a fish. Green Herons, like crows, use “tools” on occasion. It’s interesting to note that Green Herons usually have better luck with live bait, such as live insects. It appears that they understand what many fishermen already know: live bait works best.

Since we’re on the subject of feeding, and though I’ve mainly written about and documented them stalking prey, Green Herons are considered sit-and-wait predators, like Eastern Bluebirds or Red-tailed Hawks. The more I watch them, the more I notice them foraging that way. Here’s what I often saw at first. (The dragonfly is in the foreground; just follow the young bird’s sightline.)

But here’s what I’m now seeing more often. Instead of stalking, this bird stayed in place and made attempts at anything and everything that flew just above the algal bloom that covered much of the lake.

A Bird’s Beak and Neck

Incidentally, the above photo is a great illustration of a couple of things. Contrary to what you might have read, Green Herons aren’t “shy birds and rarely seen.” You’ll find descriptions to that effect everywhere, even on this Chesapeake Bay Program page. But, that’s just not true from my experience at Lakeside Park. You can easily spot them as they’ll feed in the open, and you can get quite close to them, even to the adults. The photo above also illustrates the importance of a bird’s beak and neck, something few of us ever consider. Though birds, like us, have forelimbs and hindlimbs, they can’t use their forelimbs, which have been modified for flight, in the same way we use ours. Thus they rely on their necks (with those extra neck vertebrae) and their beaks to grasp and spear and do countless other things, including maintaining contact or communicating displeasure or doing whatever the youngster in this next photo was doing.

This young bird was clearly conveying something to its parent in the dark, early morning. It’s funny. I’ve never once observed a Green Heron spearing another, but I can’t tell you the number of times I’ve observed interactions like the above. Here’s another example, this time involving 2 juveniles and an adult. I was too far away, but I could imagine hearing all that rattling. 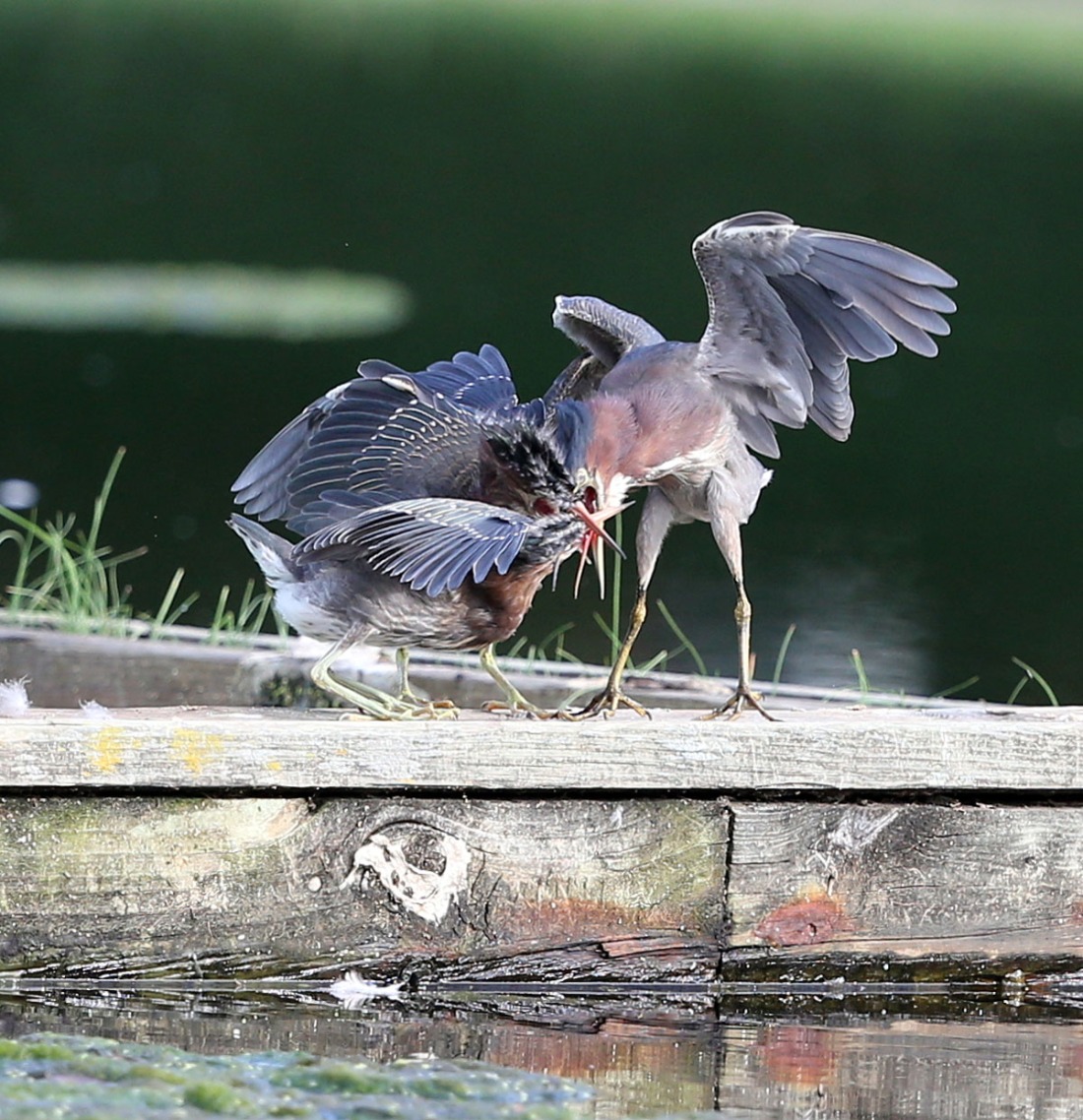 As I consider the 2 photos above, I’m reminded of something I read recently on the eminently bookmarkable University of Michigan, Museum of Zoology website: Animal Diversity Web (that link will take you to the “About Us” page): “Green Herons have an elaborate set of calls and body postures that they use for communicating with other green herons.”

Here’s something else very few of us consider. Though birds are unable to speak, they have an amazing array of communication skills. I’d read about and had a vague sense of that array, but then I witnessed and better understood it while observing Ospreys, Killdeer, and now, Green Herons. FYI, I wrote about the “sophisticated communication system” of the Killdeer in “The Killdeer Saga, Part 2,” under “More Hatchling Observations.”

While observing the Green Herons at Lakeside Park, not only have I seen displays like the above and like the ones I captured and included at the end of my last blog, “An Ode to the Green Heron,” but I’ll bet I’ve heard just about every sound Green Herons are capable of making.

I’ve heard nestlings’ food-begging calls, the staccato “kek-kek-kek-kek-kek” calls (agonistic calls?), the dog-like growls (also agonistic calls?), the screechy (squawky?) alarm calls, (given in the presence of a visiting Cooper’s Hawk), the signature “skeow” calls that the birds give for various reasons both in flight and when perched, and assorted contact calls. I’ve heard calls that became more elaborate over time and ones that became louder or softer. Now, I assume that most of those calls and gestures served some kind of communication purpose, as virtually every one was met with some kind of response.

As we begin to slowly wind things down, I’d like to touch on a few more things about our subject bird. Dave Davis from PA informed me that he grew up calling Green Herons “shikepokes.” Others refer to them as “shitepokes.” Felicity Rask, a Virginian, an avid birder, and one who tears up at the playing of 3 different national anthems (she’s also lived in England and Argentina) asked me why they were called Green Herons.

Here’s part of my response (and I sent her the above photo, too): “Usually, the birds appear dark, though juveniles always appear lighter. But in just the right light, Green Herons (juveniles and adults, I believe) have this marvelous green coloration on at least their wing and tail feathers. Now, whether this is caused by the structure of the feathers or pigments, I’m not sure. I hope this helps.” As it turns out, that green coloration may extend to some of the contour feathers including some on the adult’s crown. I always like to tell folks that common names always come about for a reason. This is true of colloquial names like “shikepoke,” as well.

Felicity also told me that the Green Heron is one of her favorites. Others, including Walt Webb from MA, have echoed that. This species is indeed a favorite and beloved by many. One reason: the birds can be so downright entertaining. 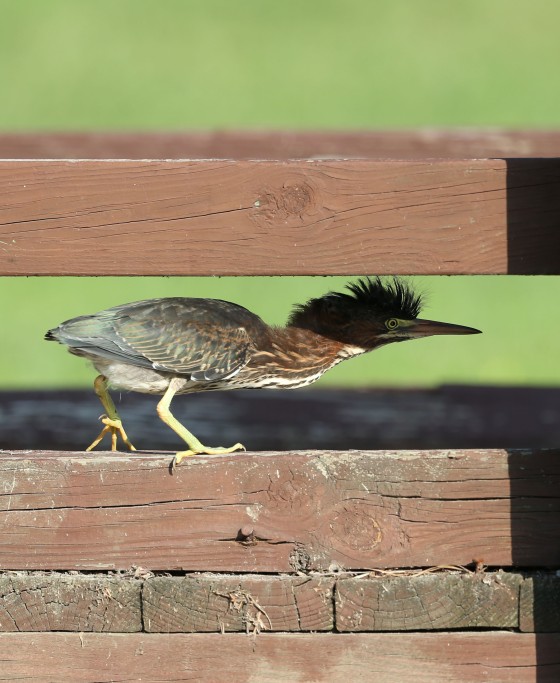 The End of the Nesting Cycle

I mentioned the nesting cycle earlier. The cycle begins with birds’ arrival in the spring, pair formation, nest-building, etc. and ends with birds’ dispersal. As I visited the park, I was able to track much of that cycle. I watched nests being built, hatchlings emerge, fledglings taking their awkward “first steps,” and early flights. During the time that followed, the young Green Herons pretty much stayed in the park, sometimes returning to their nests where they were fed by their parents. At times there were 30 or so juveniles and various adults around. But then slowly, the juveniles would leave the park with their parents to feed elsewhere, and I’d see fewer and fewer birds. I visited the park recently and found 1 juvenile and 1 adult. I haven’t been back in a few days, but it wouldn’t surprise me if none was still there. Birder extraordinaire and VA eBird reviewer, Rob Bielawski, wrote on Facebook recently that herons, egrets, and ibises were dispersing outside their breeding ranges over the last few weeks. No doubt this is true of many of the birds at Lakeside Park.

I promised at the end of my last blog that I would include here more heron family and park visitor photos. Let me share with you 2 that I especially like. The first is a photo of a Great Egret visiting Lakeside Park to feed, and the second is a photo of a young girl playing with her siblings just before nightfall at nearby Elizabeth River Park.

The New England birding world—and beyond—just lost someone incredibly special: Ida Giriunas. She was a fixture, a pillar, a mentor, a legend, a role model, a teacher, a birding matriarch, a giant. She touched many, many lives, including my own. Barbara Volkle, the longtime moderator of the MassBird listserv, offered up this wonderful tribute to her:

Ida Giriunas, long-time birder and trip leader, passed away yesterday.  She was 91. Ida was a force of nature, fierce and passionate about birding. She led and participated in many trips for the Brookline Bird Club, serving as a trip leader and past president and board member, spearheading the nationally known BBC pelagic birding program and making an annual trip to Machias, Maine for Atlantic Puffins and other downeast specialties. Dedicated to birding, she was happy to share those experiences with those new to the birding world, the BBC and others. Those of us who knew her appreciated her directness, sense of humor and hearty laugh. Her years of service have been invaluable in helping to make birding in New England the joy that it is. We won’t be able to replace her, and those of us who knew her are heartbroken.

Here is one of the last photos of Ida, courtesy of Maggie Peretto, who attended Ida’s last Brookline Bird Club-sponsored Maine Atlantic Puffin trip. It’s fitting and telling, here, that Ida is in the field.

Also, courtesy of Maggie, are these 3 words at the end of her tribute to Ida, words to the effect that Ida was passionate about birds and that her indomitable spirit will live on: “Soar free Ida!”

Dave Gibson  formerly taught at various places in MA including Fisher College, MassBay Community College, and the Harvard Museums of Cultural and Natural History, and was the self-appointed Ornithologist-in-Residence of South Norfolk, VA before moving to PA. While in VA, he also worked with the Elizabeth River Project, the blog sponsor, as a bird trip leader, teacher, educational consultant, and photographer. And he provided those kinds of services to other organizations, too. He has written and spoken publicly about birds and bird conservation and has taken too many bird photos to count, some of which have won awards and been published. See his eBird photos and recordings here. Dave is an active eBird contributor. Please keep in mind when viewing the photos that some were taken for documentation purposes and are of poorer quality.