I visited Lakeside Park, that small, unheralded, yet surprisingly birdy, Chesapeake, VA park a week or so ago. The park was noticeably different. It had an abandoned and lifeless feel. All that spring and early summer bird activity and noise that I’d written about in my prior 3 blogs had abated. Roadway noise and cicada calls had become the dominant sounds.

The 30-odd Green Herons that had fledged from the concealed stick nests surrounding the lake, save the one below, were nowhere to be seen. They had dispersed, if not migrated.

Some of the dragonflies and damselflies that had called the area home were still around, but they’d disappear shortly, too. Interestingly, some would migrate like their fellow winged creatures, the birds.

As I stood at the lake’s edge that late August morning, I observed the above. But I also observed a southward migrating and transient juvenile Lesser Yellowlegs as it fed on the algal bloom, as many of the Green Herons had done earlier.

And I watched a number of Mallards including this eclipse, or non-breeding plumaged, adult male as it swam and fed in the bloom.

I was recently asked by Barbara Slatcher, who is with the Center for Conservation Biology and who coordinates OspreyWatch there, if I were sad. I replied: “Yes, I have mixed feelings in that that park was only recently so full of life and activity.”

I’m reminded of the opening paragraph of Andrea Stephenson’s marvelous blog post, “Brief Delights.” Andrea is a gifted writer who finds inspiration in nature’s cycles. She writes here about seasons changing and “winged creatures” responding, using language that, to me, hints at both mystery and sadness.

Summer is a season of brief delights. Tiny beings on gossamer wings cloud the air for fleeting moments. Meadows undulate in an abrupt dazzle of colour. Birds swoop in from their long journeys to a frenzy of feasting and breeding. It is a season where things appear like magic, before vanishing as though they were never there. Where do they come from – the flies and the beetles and the butterflies? Where do they go to when their season has ended? They appear and then they fade, leaving behind traces on the air and the memory of wings.

Gosh, I love those words. And the questions! You’ll notice that just below that paragraph is a great photo of a pair of damselflies. Her other photos are lovely, too.

A Photography (and Birdwatching) Aside

Take another look at the Green Heron photo above. Now, here’s a silhouette of that same bird. It was slowly walking along the bulkhead that surrounds much of the lake. In order to capture it with my gear, I positioned myself such that I was both facing the bird and the morning sun and had the suns’ reflections off the lake as a backdrop. I think the resulting specular highlights in some ways make this photo. 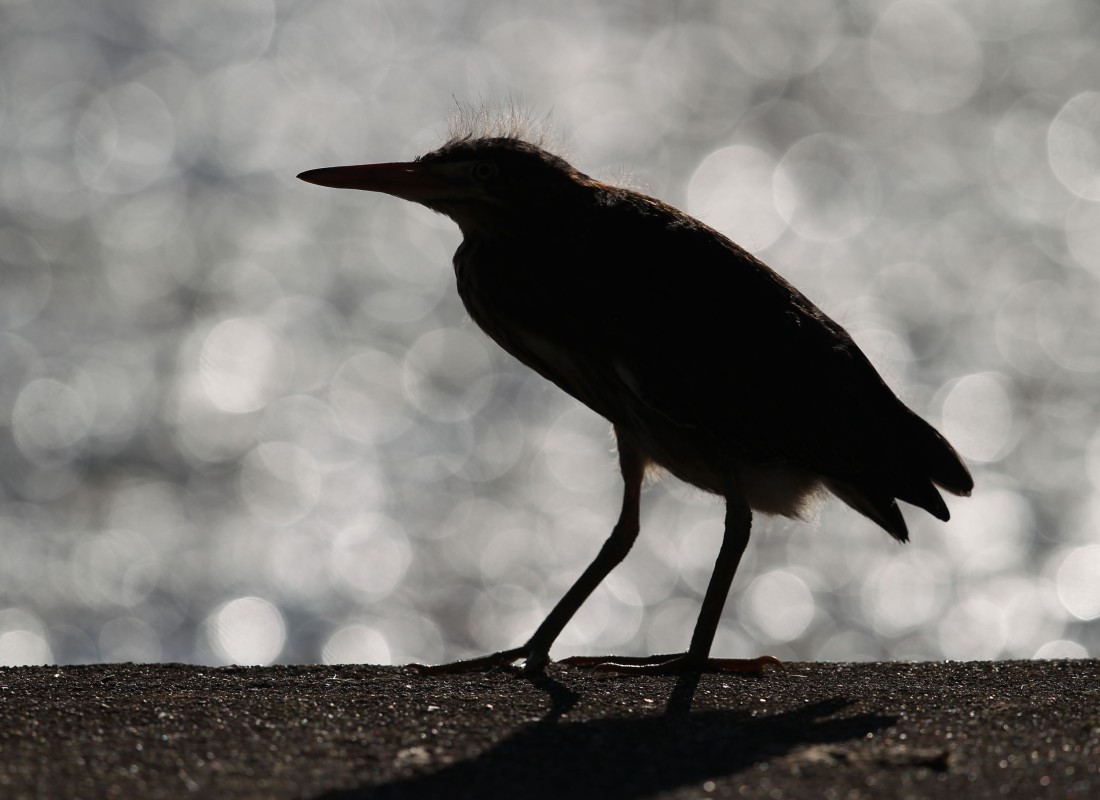 I’m growing fond of capturing images like this. Silhouettes reduce subjects like this bird to their basic shape. They can also capture a characteristic pose or gesture. Let me take this a step further for you birders out there. Sometimes when you’re in the field, the only identifying tip you have is a (sometimes fleeting) shape, pose, or gesture. So mastering those, as well as mastering the usual field marks, can be very helpful.

Facebook “Birding Virginia” member, Mike Godfrey, in his reaction to a similar silhouette that I’d posted earlier, put it this way: “Shape, placement, and behavior are at least as important as markings, by some accounts more so.” I couldn’t agree more. Mike then joked, referring to yours truly, “Perhaps he’ll favor us one day with a ‘Backlit Bird Guide’.” I responded that that would be a great book idea. But, of course, it would be a book that would be almost impossible to create.

I realize that the title of my last piece was “The Green Heron: Final Thoughts,” but I still have a few more things to say about this “small and stocky, shy yet cocky” species. I wrote the following in that last blog: “Usually, the birds appear dark, though juveniles always appear lighter. But in just the right light, and those are the operative words, Green Herons (juveniles and adults, I believe) have this marvelous green coloration on at least their wing and tail feathers. Now, whether this is caused by the structure of the feathers or pigments, I’m not sure.” I then provided a photo of a very green juvenile. Well, photographer, Mike Poole, “just a guy with a camera,” has provided me with a great shot of a very green adult.

So yes, adults do have that nice green coloration, as well. (This bird is in typical Green Heron habitat, isn’t it? You can just imagine it catching a fish there in short order.)

I also wrote in that last blog that the Green Heron is a favorite of many. Well, that would include Fred Amico’s’s 10-year-old grandson, whose favorite color is green! Fred is a fellow member of the online photography forum fredmiranda.com. I mentioned that forum toward the end of my blog, “More Midyear Bird Photos and Photo Tips.” Here’s Fred’s story, which he kindly agreed to share with me:

“My grandson is 10 and has shown an interest in birds. Because of that we sent him to a “bird camp” at a local wildlife place recently, and he thoroughly enjoyed it. I now have him going with me on some outings, as he also got interested in photography. OK, on to the green heron. As it turns out, green has always been his favorite color, for sneakers, socks, tee shirts, etc. He got very excited the first time he saw a green heron. He commented that he really liked the bright green colors and feather detail. Now any time we head out to shoot birds, he is always on the lookout for one. He enjoys all birds, but the green heron remains his favorite.

Kudos to all of you from New England to Virginia who are witnesses to, and are reporting on, bird dispersion and migration. I’ve enjoyed your reports of pelicans dispersing north and broadwings moving south, Chimney Swift roosts and “nighthawk spectaculars,” “disappearing hummers,” and “shorebird shows.” Keep up all that good work.

“The great migrations of the world have been inspiring people for hundreds of years. The migration of birds is particularly fascinating because small species primarily navigate alone, at night, and at high altitudes, so people do not always see it happening. They are in your backyard, and then they are gone.” David Toews, assistant professor of biology at Penn State

Dave Gibson  formerly taught at various places in MA including Fisher College, MassBay Community College, and the Harvard Museums of Cultural and Natural History, and is the self-appointed Ornithologist-in-Residence of South Norfolk, VA. He works with the Elizabeth River Project, the blog sponsor, as a bird trip leader, teacher, educational consultant and photographer. And he  provides those kinds of services to other organizations as well. He has also done some writing for BirdWatching Magazine, and is a member of the Virginia Society of Ornithology. See his eBird photos and recordings here. Dave is an active eBird contributor. Please keep in mind when viewing the photos that some were taken for documentation purposes and are of poorer quality.